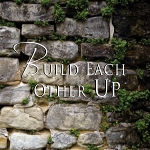 What comes to mind, when you hear the word, “edify”? Is it just a kind word? How about a positive pep talk? Would you think of  constructive criticism?

Is there more to edifying someone than a kind word or compliments. Though a kind word can go a long way; an apt answer or a constructive word can do a great deal, for someone in need.

What is this? Am I saying, “Negativity is acceptable?” Destructive speech is never really acceptable; yet it is preferable to silence. What am I talking about?

A couple of weeks ago, I wrote an article called “Can We Talk? Are You Seriously Interested In…?” If you read the preview, then you may have thought, “This guy is talking about a certain YouTuber.”

If so, you would have been mistaken. John’s character of BDoubleO was a rhetorical device used to prod a conversation. If you read the story, then you’d discover my real question. What are you interested in reading?

I won’t repeat what I’ve already written; however, Ephesians 4:29 does come to mind when I considered that blog article. Simply put, it says “We should not use our mouths to destroy or tear down others. Speak words that are useful for edification.”

What is edification? How does it relate to creating content for a blog, YouTube or elsewhere? Did you know that edification is simply an old English word meaning “to build” or “instruct”?

I showed the original article, to a friend.  My friend suggested, “People may be afraid to say anything.” I was surprised and my heart was glad, for the insight. Later, I prayerfully considered his point and a certain Scripture came to mind.

I can sense the Spirit saying “They are afraid because they don’t know how to edify someone.” It’s original meaning is “to build, to strengthen and to improve”

You’ll most likely find this word used in a King James Bible translation or the New American Standard Bible. It’s a seldom used word in today’s society and its meaning is watered down. Teaching is only one aspect.

What does it mean in today’s society? How does it relate to “constructive” feedback or constructive criticism?  Before “No Negativity” ever became a fashionable trend, Paul wrote these words in Ephesians 4:29:

29 Let no unwholesome word proceed from your mouth, but only such a word as is good for edification according to the need of the moment, so that it will give grace to those who hear.

For me, Paul isn’t just saying “Don’t rip someone apart, with my mouth.” For such destructive words never helps anyone. The same thing applies to the use of foul language in YouTube and other popular media.

Do you know there is something worse than a spoken destructive word?

How so? It’s very easy to fall into the trap of depression and think “No is reading or they don’t care!” It is also easy to deceive yourself into thinking, “I’m doing a great job! They must really like the pornography!”

There is a word for three lies! You already know it. How can I be so certain? Jesus is not the only person giving needed feedback! Some people have chipped in, with their own comments, off camera.  Did you get my point, though?

When I wrote my last article, I was floored by the replies to “Overcoming the Fear of Being Different“.  The comments spoke volume! Did you know my heart was strengthened? I am glad the article is helping someone, for that is my goal in writing.

Here is an old blog writing tip: Write for the audience; not yourself. This principle applies to YouTube, too. How so? Everyone has a need and I’m no exception.

When I visit certain YouTube channel; it’s not because I like video games. It’s because I’ve a need for clean fun and humor.  If I don’t find it, then I go somewhere else.

Why should Inspiration Point be any different? As such, I do pay attention to comments and site traffic. They can give valuable clues on a visitor’s interest in someone’s content.

Shall we get to the meat? How does one edify someone, if it’s more than a kind word or two? Within the past year, I have been blessed by “words of correction”, strengthen by words of encouragement and helped by constructive criticism.

At one time, I was given a needed word of correction. Though he probably wanted to rip my head off, John kindly corrected me. With the Holy Spirit’s help, I saw my friend’s point and corrected my errors.

By confronting me, he spoke some very needed words of correction? How did he do this? As John is a Christian, I suspect he had the smarts to pray and asked for help.

Prayer is a powerful first step. Here is the second step: Don’t react in anger; however, you should respond in humility and love. I could tell John was angry and upset. I don’t blame him.

However, I could also see an effort to write in humility and love. This brings up, a third step: Trust God! I could sense the Spirit and I knew that he was helping, both of us.

What about constructive criticism? These days, I use a tool called “Ginger” to help with proof checking my article. Though it’s no substitute for actually reading the article; it has proven helpful. How did I get it?

Somebody constructively commented on my grammar skills. With his helpful comments, I did some research and I discovered Ginger. Plus, he echoed another person’s comment and it resulted in photos at the top.

If he hasn’t spoken a word, then I’d not have spotted the problem. How does one give a constructive criticism? Is it helping the person? Here’s a simple illustration.

A couple of years ago, I wanted to use a video game to illustrate a point. Someone kindly pointed out the problems; he went on to point to a solution. I was greatly helped by this conversation.

How about words of encouragement? Some time ago, I felt the need to make some changes in my blog writing. I talked with a friend, at church. He did encourage me, to dump the limit of 800 words.  I, also received other encouraging words.

There is a final way to edify someone; it is called “prayer”. As a content creator on the Internet, I am faced with many needs. The same thing is true of my fellow bloggers and YouTubers.

The Holy Spirit knows the needs of your favorite content creators, better than anyone. Don’t be afraid to ask Jesus, “How should I pray for this person? What is this person’s need?” Pray what’s on your heart and listen to the guidance of the Holy Spirit.

Did you know there are several Scriptures exhorting Christians to pray for each other? Here is a list of those verses. You can visit The Official King James Online site and read it, for yourself.

5 thoughts on “How Do We Edify One Another?”